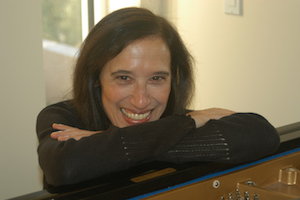 Pianist Elizabeth Wolff has developed a large following both as a chamber musician and as a soloist. She has collaborated with such noted string quartets as the Shanghai, the Brunswick, the Rosamonde, and the Zapolski, and has participated in music festivals including Music Mountain, Aspen, Music at La Gesse, Mohonk, the Beethoven Festival, and the Festival de Musique en Lorraine. Founder and Director of Music at Lake Willoughby, Ms. Wolff has also been on chamber music faculties of Summertrios and Music Mountain and was for 5 years Co-Director of Chamber Music Retreats at Vassar. She is currently the Artistic Director of Music @ 10,000 Lakes.

Ms. Wolff is recipient of numerous awards and sponsorships including the Pro Musicis Foundation’s International Award, the Belsky Music Award, a Music at La Gesse Fellowship, and the Jerome Foundation debut recording grant. In New York, she was presented as recitalist on the Distinguished Artist Series at the Tisch Center of the 92nd Street Y, by Pro Musicis at Merkin Concert Hall and Florence Gould Hall, by the Metropolitan Museum of Art for their instrument collection, and at Weill Recital Hall at Carnegie Hall.

As well, she has been featured pianist in live radio broadcasts on WQXR, WNCN and WNYC. Other United States solo concert performances include the Phillips Collection in Washington DC, the Dame Myra Hess Memorial Concerts in Chicago, the Schubert Club in St. Paul, and numerous Pro Musicis sponsored national recital tours. Miss Wolff’s appearance at London’s Purcell Room received rave critical acclaim and was followed with highly successful tours of Austria, Holland, and France. She was invited back to Vienna to perform works of Brahms in commemoration of the 100th anniversary of his death. Ms. Wolff’s affinity for and love of the piano works of Rachmaninoff have garnered special notice. She was guest soloist on WQXR’s “Russian Nights” special broadcast, and she has conducted master classes as well as performed in recital at the renowned Rachmaninoff Institute in Tambov, Russia. In 2005, her article on Brahms’ evolving use of three was published for the Institute’s International Science Conference. In addition, Ms. Wolff has performed for the International Conference of the Rachmaninoff Society in London and Vienna. Of her recording of the Six Moments Musicaux, Opus 16, American Record Guide noted, “I have never heard anything quite like the enchanting soft playing in No. 5, and No. 6 is a remarkable performance…a stimulating and musical pianist.” This disc, which also features a premiere recording of the two sets of Moments Musicaux (Opus 7 and 84) by Moritz Moszkowski, is currently available at http://www.magnatune.com/artists/wolff.

Elizabeth Wolff’s commitment to teaching is demonstrated through the broad range of her educational activities. She was seen on CBS ‘60 Minutes’ in a segment featuring her student, the prodigious young composer Jay Greenberg. She has been on faculties and given master classes for numerous colleges, including the University of Minnesota, Hunter College, SUNY at Purchase, and New York University and has presented for the College Music Society, the World Piano Pedagogy Conference and for the Piano Teachers Congress of New York. She has coached chamber music in affiliation with Chamber Music Associates, as well as maintaining a diverse class of individual students. Her Access To Music series, whose intention is to introduce works by contemporary composers while simultaneously providing more visibility and viability for the solo recital is celebrating its 10th year. Ms. Wolff received a Bachelor of Music degree from Northwestern University and a Master of Science degree from The Juilliard School where she was a scholarship student of Rosina Lhevinne. Her mentor is currently and always Seymour Bernstein.